“The first truth is that the liberty of a democracy is not safe if the people tolerate the growth of private power to a point where it becomes stronger than their democratic state itself. That, in its essence, is Fascism—ownership of Government by an individual, by a group, or by any other controlling private power.”
– Franklin D. Roosevelt, 32nd President of the United States; “Message to Congress on Curbing Monopolies.,” April 29, 1938.

The most interesting discovery in the field of Information and Communication Technology for 2013 was, that the international community obtained the certainty, that a small Anglo-American elite is in almost global and total control of all ICT facilities. Thanks to Mr. Edward Snowden, a former executive controller who started to realise the monstrosity of the plot to keep the world-population under continuous surveillance, the deprivation of privacy for the most, in the interest of a few, is no longer a secret, but a well-documented fact.

Alas the only logical conclusion, namely to acknowledge the aggressive, imperial character of Anglo-American leadership, appears too revolting to accept the obvious for the collective psyche in the Western democracies. Their citizens have been brainwashed to believe that “we are only defending ourselves” if “our freedom is under attack” – against any enemy!

Out of the blue, in 2013 it became notorious beyond dispute, that the Anglo-American electronic surveillance programmes are also targeting their own population and the ones of their satellites – even including their allied heads of state: 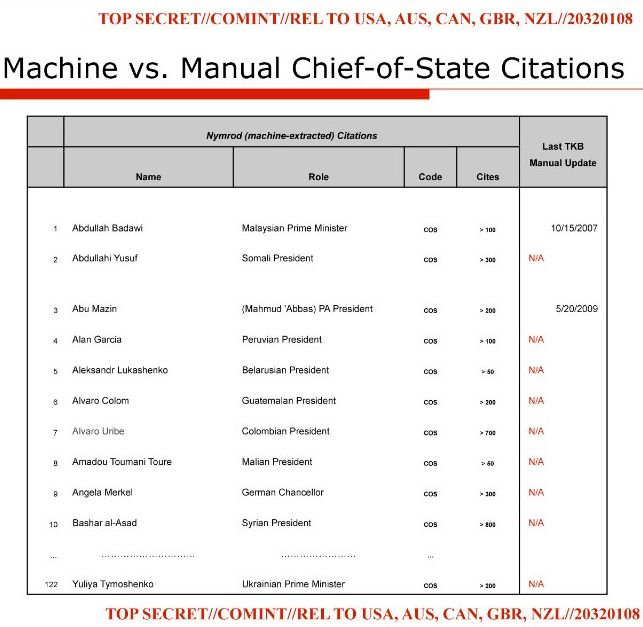 Outright denial of the obvious1

This fact is obviously so disturbing and confusing for all those who have been raised with the complex of Anglo-American moral superiority that the Establishment has been at greatest pains to rationalize it. The only rationale it has been capable of advancing – whenever it cannot avoid the issue altogether, which is what it logically prefers to do – is to assert that a few rotten corporate apples or overzealous officials did it – behind everybody’s (i.e., the state’s) back.

This “explanation” is clearly untenable, yet anyone that dares to challenge it, is ultimately bound to face what expresses itself as the wrath of devout believers. Their instinctive repartee is, that anyone doubting the vulgate (official narrative) is self-evidently an self-deluded “radical”.

The tactic is so inane that it would be risible if the propagandistic stakes of this discursive set-up were not as decisive as they really are. It is the Establishment’s standard inquisitorial trump. Indeed, it is not directly aimed at the critic but at whatever audience might be listening to the debate: it is meant to scare away readers and potential supporters from the critic’s warnings by tarnishing him with the most unsavoury label the system has devised for the purpose, that of the truculently naive “conspiracy theorist”2.

In the general arena of public opinion, any sceptical attack – carried out outside any conventional party line or schema – on the abuses of the power structure is likewise resisted by its discursive custodians (at all levels and of all political shades), if you are perceived as breaking ranks with your former brothers-in-arms, they will make you pay. What really counts is allegiance, not arguments. 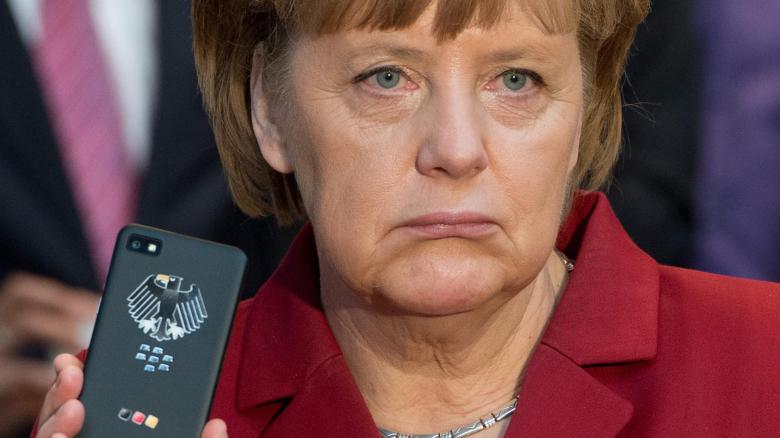 Neuland: the ICT as “new territory”

Instead of arguing at all, the Germany Chancellor Merkel, target no. 9 on the list above, tried to calm her outraged citizens by declaring the internet as “Neuland” –  too recent to be fully understood and assessed by her government yet.

Update by end of 2015: read this report – so has something changed?

As early as 1970 a book discussed possible consequences of the foreseeable merger of technology with electronic:

“[T]he impact of technology […] involves the gradual appearance of a more controlled and directed society. Such a society would be dominated by an elite whose claim to political power would rest on allegedly superior scientific know­-how. Unhindered by the restraints of traditional liberal values, this elite would not hesitate to achieve its political ends by using the latest modern techniques for influencing public behavior and keeping society under close surveillance and control.”
— Zbigniew Brzezinski: “Between Two Ages, America’s Role in the Technetronic Era“, Page 97

Since this author became National Security Adviser to President Carter in 1976 and plays a decisive role in U.S. politics until today, this statement appears like the blueprint to the present Anglo-American global dominance in ICT.

A professor emeritus recalls how the U.S. government was secretly initiating and funding the development to the “Technetronic Era”:

Let’s take my own institution, MIT. I’ve been here since the 1950s, and you can see it first hand. In the 1950s and 1960s, MIT was largely financed by the Pentagon. There were labs that did classified war work, but the campus itself wasn’t doing war work. It was developing the basis of the modern electronic economy: computers, the Internet, microelectronics, and so on. It was all developed under a Pentagon cover [Emphasis added]. IBM was here learning how to shift from punch-cards to electronic computers. It did get to a point by the 1960s that IBM was able to produce its own computers, but they were so expensive that nobody could buy them so therefore the government bought them. In fact, procurement is a major form of government intervention in the economy to develop the fundamental structure that will ultimately lead to profit.
— Prof. Noam Chomsky about Markets, the State and Hypocrisy

Its strategical importance is affirmed by a the fact, that computers and the internet were almost entirely within the state system for about 30 years – research, development, procurement feeding off taxpayer’s dollars3 – before the results were finally handed over to private enterprise for profit-making. Apple, Google, Facebook and so much more would not have started without government involvement as listed here: Silicon Valley: Your Tax Dollars at Work.

Without doubt in Brzezinski’s wrote a roadmap leading to today’s unipolar  ICT-supremacy.  Back in 1970 he asserted, that “the United States has emerged as the first global society in history“, from which derived a “unique role as disseminator of the technotronic revolution” to the rest of the world.

As we currently witness this global ‘dissemination’ of U.S.-shaped technology and applications unfold, the next question arises: which impact will this process have on the societies world-wide?

This question will be discussed right away in the following post: “Digital Tyranny“.

“Power is in tearing human minds to pieces and putting them together again in new shapes of your own choosing.”
— George Orwell (25 June 1903 – 21 January 1950), one of the most influential English writers of the 20th century.

1. The CIA does the cover-up, thereby breaking the US-Constitution – even spying on the commitee investigating the CIA:
“[CIA] top officials spent a decade making inaccurate statements […] to the White House and the American people. Next, instead of acknowledging these years of misrepresentations, the CIA’s current leadership decided to double down on denial. And when CIA officials were worried that the Intelligence Committee had found a document that contradicted their claims, they secretly searched Senate computer files to find out if Senate investigators had obtained it.”

At the end all turned-out to be just a “mistake“:
“[…] there was insufficient evidence to conclude that CIA personnel exhibited a lack of candor […] it was a mistake that did not reflect malfeasance, bad faith, or the intention to gain improper access to SSCI confidential, deliberative material.”

2. The term “conspiracy theorist” was first coined 1964 in CIA Document 1035-960:
“The aim of this dispatch is to provide material countering and discrediting the claims of the conspiracy theorists, so as to inhibit the circulation of such claims in other countries.” 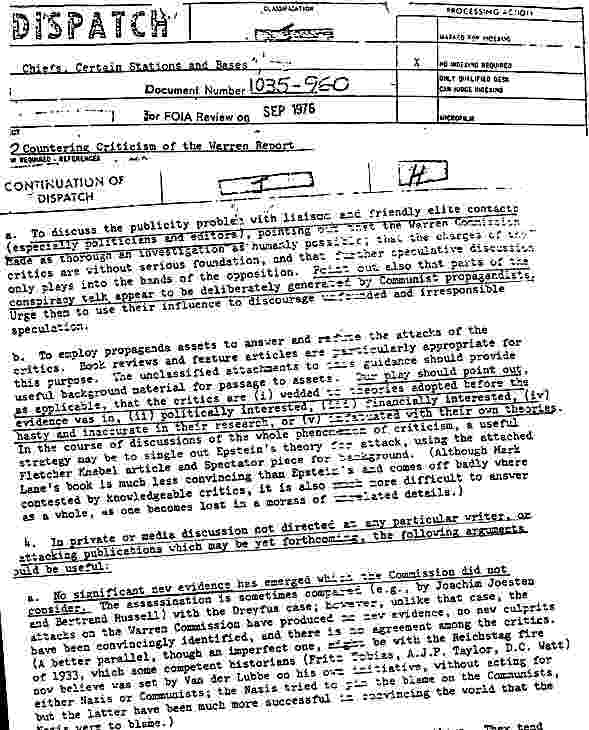 3. “Between the 1950s and the mid-1990s, US federal government funding accounted for 50–70% of the country’s total R&D funding, […] Without federal government funding for R&D, the US would not have been able to maintain its technological lead over the rest of the world in key industries like computers, semiconductors, life sciences, the internet and aerospace.” – writes economist Ha-Joon Chang in his book “Bad Samaritans: The Myth of Free Trade and the Secret History of Capitalism”, on page 134.