— for Tanzania and the rest of us

Helping Tanzania to establish her own IT-industry by an Open Source software toolkit for solar-powered low-cost, low-energy PCs: Uhuru OS.

In order to keep the following text easy to read and to minimise technical gobbledygook please browse through the other posts and look up the links too. Pointing at links makes notes appear containing auxiliary information.

How It All Started

The project presented here emerges from 3 years of research on-site in Tanzania. It has found the official support by the Ministry of Communication, Science and Technology. For the educational collaboration with their academy the Dar es Salaam Institute of Technology we established a Tanzanian charity organisation — the KUKU Trust.

The picture above shows the me, the German initiator of the project together with the leadership of the IT-department of the Tanzania Police Force who think that this project bears a feasible solution to set-up a nationwide digital information system.

Since the official perusal resulted in excellent acceptance, the next step before mass-production is to build fully functional prototypes.

According to the CIA “Tanzania is one of the world’s poorest economies”. Needless to say that I went looking for funds elsewhere and started with this recommendation letter at my embassy.

There is a joint programme agreement between Tanzania and the European Commission 2008–2013 which defines the areas of funding for all EU-member states. As “Science and Technology” has not been part of that list of priorities, all public authorities approached so far have declined support for the same reason: the project does not fit into their set target framework.

Helping Africa as general motto unfortunately gives sufficient cause to donate already. But this campaign aims at inspiring at least some thousand individuals to contribute for the most compelling reason:

The Idea Behind The People’s Computer

The concept is best explained by an example of amazing technology from not too long ago: From 1938 to 2003 more than 20,000,000 units of the People’s Car were sold worldwide, lovingly pet named as VW Beetle.

What made this car explode in popularity was its character as simple, quality product for driving — free from featuritis and planned obsolescence.

Just imagine that one could break-up a retired VW of 1952 for spare parts to use in a 1972 model while today it already seems impossible to obtain an Android update for a two year old smartphone!

A Timeless PC System For The Rest Of Us

Leaving no stone unturned on my research for software implementing this timeless Think Small approach, I discovered the Étoilé project.

One could describe Étoilé OS as the Mac OS an altruistic (unselfish) Steve Jobs might have created, as both systems set-up on UNIX and use an almost identical software framework. Alas Jobs himself “killed” Apple’s brilliant OpenDoc in 1997 – but it will resurrect in Étoilé OS!

Understandably a small codebase reduces the power-consumption of the hardware while increasing the speed.

Google tries the same thing with their Chrome OS — however by limiting the software’s functionality, therewith rather creating an input terminal for Google’s global server network than a generative, autonomous PC.

Otherwise their hardware is a real bargain — so why not putting it to a better use?

Have Your Own People’s PC

Briefly the objective of this campaign is about 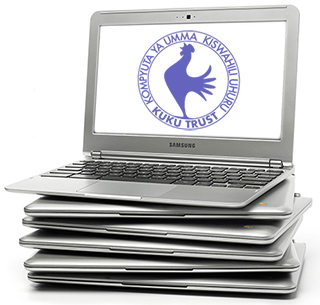 What We Need And What You Get

Our goal are US$75,000 in order to work-off the To-Do list. The lion share will be go into the Étoilé development. Its outcome will be Free Software in public domain.

Latest after 18 month there will be an installer which can boot from the Chromebook’s media reader slot giving you two options:

1. Boot from the SD-card to test Étoilé OS
2. Install Étoilé OS on your Chromebook

Within 12 month expect a pre-release version for testing. Needless to say that we shall keep you updated about all ongoing development.

Why Replacing Google’s Chrome OS At All?

The People’s PC is meant for “the rest of us” who not only want to possess their PC but also to own it. For a deeper explanation about the difference continue with reading About Big Brother and the Disposition Matrix.

Please note: Google’s system comes with a Kill Switch — which means they can remote control or even deactivate your computer. At the same time your personal data has become a comodity which you agreed to deposit in their institution. Alike banks they “work” with your assets.

Recently Microsoft let the cat out of the bag publicly redefining ”PC” to be ”Personalized Computing”.

The Inviolability Of Your Home-Folder

Uhuru OS integrates a vault for your classified material, a secure line for telephone or internet conversations and confidentiality of messaging and file transfer by military-grade encryption algorithms.

Its state-of-the-art security architecture prevents the penetration of all kind of malware like viruses, worms, trojan horses, rootkits, keyloggers, dialers, spyware and adware.

What Is The Difference Between Étoilé OS And Uhuru OS?

Uhuru OS is the version which contains a Kiswahili localisation. ‘Uhuru’, the Swahili word for freedom, emphasises our commitment to self-determined Personal Computing.

3 years ago my intention was to utilise Ubuntu Desktop for the Tanzanian People’s PC. In fact the domestic Kilinux project attempted to maintain Kiswahili localisation packages.

It didn’t work out for Tanzania due to the following reasons:

A small codebase is easier to maintain, Uhuru’s object-oriented application programming interface outsources most localisation into simple text files, extensions can be added in the programming language Smalltalk.

In the long term our Uhuru IT-toolkit might turn-out as the more sustainable and useful contribution to the public domain. 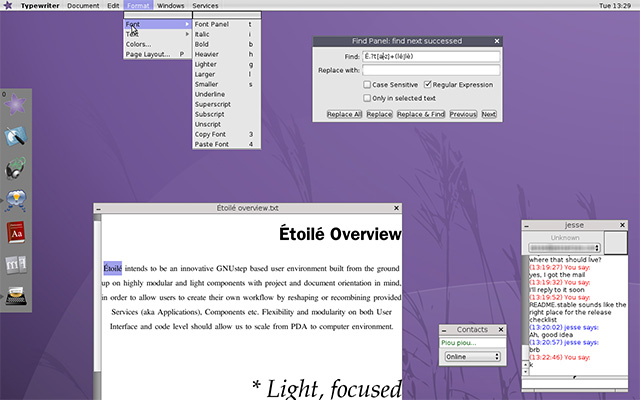 Above all our KUKU concept enables sustainable development for Tanzania in 3 areas:

With your help the KUKU Trust hopes to set off an initial ignition boosting the formation of a free Information Society in accordance with the UNESCO strategy.

Worst Case (the funding goal will not be reached)

We’ll start the development with the money available without delay. Stay tuned to our website; we shall do all it takes to make the People’s PC materialise.

Above all the convenience to obtain information about the product and the usability of the product itself can be improved.

A good start is to establish a user forum. In the following community request for additional features and functions can be realised with the surplus.

Uhuru is designed as an unfinished IT-tookit where the entire system can be enhanced by plug-ins similar to the Firefox webbrowser. Expect that a great variety of additional components, modules and services will allow you to shape your perfect workflow.

Provided that your contributions exceed the goal by far, we shall post an update in order to pull forward our future plan to port Uhuru OS on an US$100 microcomputer – something alike the Raspberry Pi.

It Takes A Crowd To Crowdfund!

Roughly 3000 individuals taking chances with an average contribution of US$25 will make the People’s PC become reality for entire mankind.

In order to archieve our goal the news must spread like wildfire. Some people just can’t contribute, but that doesn’t mean they can’t help. Please get the word out and make some noise about your campaign. Your engagement can make a difference!